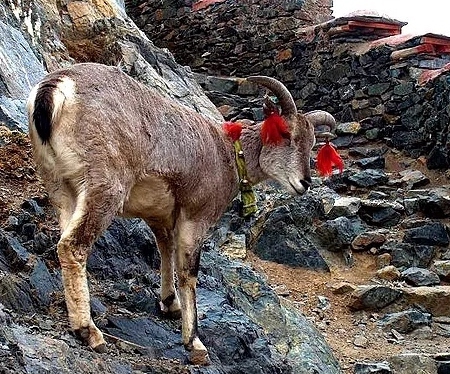 The Himalayan Blue Sheep (Pseudois nayaur nayaur), bharal, Rock Sheep喜马拉雅岩石羊in Chinese, is found in the high Himalayas of Nepal, Tibet, China, India, Pakistan, and Bhutan. This goat-sheep is considered a low risk, near threatened species, and may now be under threat from a viral disease spreading from domestic goats and sheep along the India-Tibet border.

Ray, the owner of Blue Sheep has walked mountains to find them, usually seen only in the distance. One time she and a friend climbed a steep mountain to a monastery. A ‘redeemed’ blue sheep (marked by red ribbons in his ears; no one is allowed to kill him) lets visitors stroke him but when they turn to leave he butts them. Ray’s dog was knocked over edge and whilst trying to divert attention from others, she herself got a heavy butt. They discovered later he is well known in the area!

Located in Chengdu, Sichuan Province, the Blue Sheep store is a social enterprise that collects handcrafts from different minorities, from those with disabilities, with heavy medical bills or suffering from poverty for some other reason. Blue Sheep pays on receipt of products so craftsmen do not have to wait for payment. Currently over 500 people are helped in this way.